Having decided on the trip at the last minute, I packed my belongings the morning of. We planned on camping, so I figured I wouldn't be packing that much anyway. After 2 minutes of throwing together a couple of shirts and 2 hours of searching for my sleeping bag, I remembered why I hate packing the morning of - I am notorious for losing things.

Could I have called someone to borrow their sleeping bag? Sure. Was it easier to google "Inns in Maine"? Definitely. And that's how we ended up at The Inn at St. John in Portland, Maine.

At $53 a night, I wasn't expecting much, but I was pleasantly surprised! We arrived Sunday afternoon to a warm welcome from the desk clerk, fresh cookies in the lobby, and a small, but clean and comfortable room. The Inn was located about half a mile from downtown Portland, so we quickly dropped off our backpacks and headed for a late lunch.

Choosing a place to eat was easy. There were tons of options and we were starving. We settled on a Mexican restaurant called Mesa Verde. Even though the place was nearly empty, the food (mango, avocado, and chicken quesadillas) was delicious. The server wasn't bad either. In addition to being cute, he suggested that we head to Dobra Tea for slam poetry semi-finals that night.

We took his advice, and headed to the tea house after a few hours of window shopping and used book store browsing. This was my first poetry slam, and it was exactly how I pictured it would be. It was very emotional and moving (and sometimes contrived), and ultimately was an interesting experience. I, of course, contributed to the experience by spilling my entire mate with honey all over our table, narrowly missing the poetry judge sitting across from me.

The next morning, we set off (after a delicious continental breakfast at the Inn) toward the Portland Art Museum. We were disappointed to discover that the museum was closed on Mondays.

We changed course and decided to find a tattoo parlor. We stopped at Hollowed Ground, and Nick Reddy quickly sketched a compass rose tattoo that Jenna liked a lot.

While we waited to for Nick to do whatever it is that he does to get ready for tattooing, Jenna and I stuffed our faces at Otto. I made the mistake of only ordering two slices of pizza (one slice of mashed potato, chives, and bacon and one slice of tortellini). I soon had food envy, and ordered a third slice. This time, I decided on chicken and spinach. I live in New Haven, so my expectations for pizza anywhere else are pretty low. Otto, however, ranks very close to New Haven pizza. 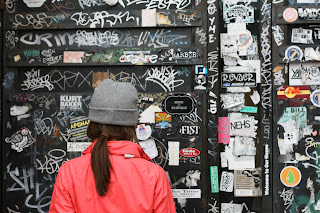 Full of pizza, Jenna got her tattoo, and we set off for some more window shopping. We spent a lot of our shopping time talking to store employees, and learned a lot about the local economy and the housing market in Portland. We also learned of an island known for "fairy houses" about a 5 minute drive from the city. How could we resist? 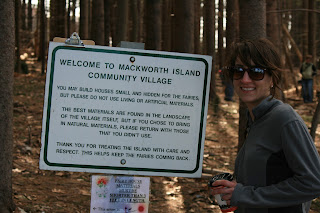 We headed back to our car at the Inn and drove the short distance to Mackworth Island. Mackworth is a small island that you can easily hike (walk?) around in just under an hour. Add a few extra minutes to create a house for fairies made out of sticks and rocks, to climb trees (Jenna), and to take pictures of the beautiful ocean views.

Having already seen most of Portland's downtown area already, we decided to head to the famous flagship LL Bean store. I bought a few supplies for my Peru trip, and then we headed to the other outlets for some amazing deals. It was lucky for my wallet that the shops closed at 6.

After all of that shopping, Jenna and I had burned off the pizza and were ready for a second go at Portland's Mexican food scene. We had seen El Rayo Taqueria earlier in the day, and were intrigued. We decided everything on the menu looked delicious, so we shared a few small plates: fried plantains, grilled pineapple with chili powder, pork tacos, and margaritas. Everything was delicious, but the grilled pineapple was by far the best thing we sampled.

Stuffed, we headed back to the Inn and called it an early night.

Did you think a misplaced sleeping bag would stop us from hiking Acadia? No way.

We woke up early the next morning and drove another three hours to a motel we found in Ellsworth that was aptly called Twilite. In Jenna's words, our motel room was "the place where horror films start." To be fair, the place was clean and the staff was friendly, but the wooden paneling on the walls and the floral bedspread screamed axe murderer.

We left our motel in a rush, and headed to the mountains for some fresh air. After much deliberation, we decided to hike Cadillac Mountain, which happens to be the highest point along the North Atlantic seaboard. The parking lot was officially closed due to the recent government budget cuts, but we parked along the side of the road and trekked up to the trail head. The hike was worth the 3 hour drive and the sketchy motel. The scenery was gorgeous and the views of the coast were unmatched.

Tired from our drive and from the trek, we stopped in Bar Harbor to grab a happy hour beer. The bartender mentioned a movie theater in town that serves pizza and has couches, and we were immediately sold. We headed to the theater for a matinee showing of Girl Rising, and made ourselves at home napping on the soft couches and realizing the lack of diversity in our food choices.

We headed back to the wood paneling, triple checked the locks on the door, and called it another early night. We had a 7 hour drive back ahead of us, and needed some rest.

Overall, I would highly recommend both Portland and Acadia. Portland was artsy, had friendly people (except one New Haven hating idiot), and we found fairly cheap accommodations. The only downside to Portland was that it was surprisingly difficult to find places to recycle. Acadia was an adventure, with its obvious pluses and minuses. All in all, it was a great way to spend spring break.
Posted by Unknown at 8:54 AM No comments:

What To Pack For 3 Months Of Backpacking

It's difficult to pack for a 3 month trip. The key is to bring as little as possible.

What to bring:
What not to bring (buy them in country for less):

Posted by Unknown at 7:48 PM No comments:

Here's what's on my planning to do list right now:

Posted by Unknown at 2:25 PM No comments:

Doesn't everyone have a bucketlist?

1. Walk across the Brooklyn Bridge
2. Try to sink myself in the Dead Sea.
3. Climb Macchu Pichu.
4. See all of Paris from the Eiffel Tower.
5. Take a picture of the Mona Lisa
6. Bobsled down Mt. Pilatus
7. Take a gondola ride in Venice.
8. Walk barefooted through the Taj Mahal.
9. Vineyard-hop my way around Napa.
10. Drink mojitos in Miami.
11. Eat shoo fly pie lime pie in Pennsylvania.
12. Spend the 4th of July in Washington DC.
13. See the pyramids in Egypt.
14. Watch a performance in the Sydney Opera House.
15. Lay on the beach in Bali.
16. See a president inaugurated (Obama!)
17. Explore Cape Town.
18. Eat curries in Bombay.
19. Go to the Olympics.
20. Go to a Moroccan bathhouse.
21. Walk in the gardens of Versailles.
22. Walk along the Great Wall.
23. Travel through the Panama Canal.
24. Shop the magical bazaars in Morocco.
25. Listen to Mozart in Vienna, Austria.
26. Go to the Globe Theater and watch a Shakespearean play.
27. Press my luck on the edge of the Cliffs of Moher in Ireland.
28. Buy a beer stein at a beer garden in Germany.
29. Admire Guadi architecture in Barcelona.
30. Walk across the Golden Gate Bridge in San Francisco.
31. Purchase a swiss army knife in Switzerland.
32. Attend a World’s Fair.
33. Eat croissants at a sidewalk café in Paris.
34. Drive a ’57 Chevy in Havana.
35. Eat tapas and drink Spanish wine in Madrid.
36. Ski the Swiss Alps.
37. Visit a cave dweller in Granada.
38. Dip my toes in Big Sur.
39. Visit the Acropolis and the Parthenon.
40. Stroll along the Danube River in Budapest.
41. Leave a prayer in the Western Wall.
42. ATV across the Golan Heights.
43. Wake up to a Guinness in Dublin.
44. Shop at the Champs de Elysee in Paris
45. Cruise the Greek islands.
46. Eat pizza in Naples.
47. Wear a mask at Carnival in Venice.
48. Road trip the West Coast.
49. Visit Anne Frank’s house in Amsterdam.
50. Explore Iceland.
51. Catch a photo of my reflection in Cloud Gate in Chicago.
52. Ski Jackson Hole.
53. See a volcano erupt in Ecuador.
54. Throw a coin in the fontana dei Fiumi in Rome.
55. Walk the Spanish Steps in Rome.
56. Scuba dive in Fiji.
57. Gamble a dollar in Las Vegas.
58. Explore Malta, where Calypso, the beautiful temptress, kept Odysseus for four years.
59. Stay at an ashram in India.
60. Experience a proper tea in London.
61. Eat mangos off of sticks in Mexico.
62. Hike a glacier in New Zealand.
63. See a genuine Viking ship in Oslo.
64. Hike the Rainforests of South America.
65. Hike the Patagonian Mountains.
66. Drink sweat tea in Savannah.
67. Ski a black at Breckenridge.
68. See Dracula’s castle in Romania.
69. Get lost on the windy streets of Lisbon, Portugal.
70. Hike Acadia National Park in Maine.
Posted by Unknown at 9:13 PM No comments: