A few weeks back, I went to Dallas, TX for a weekend of professional development at an event hosted by the Schusterman Foundation.

I spent much of my time in the hotel attending workshops and hearing from incredible speakers like Howard Behar (of Starbucks) and Ethan Zohn (winner of Survivor). The hotel itself, the Hyatt, was a destination and was home to Reunion Tower, which offers a 360 view of downtown Dallas. 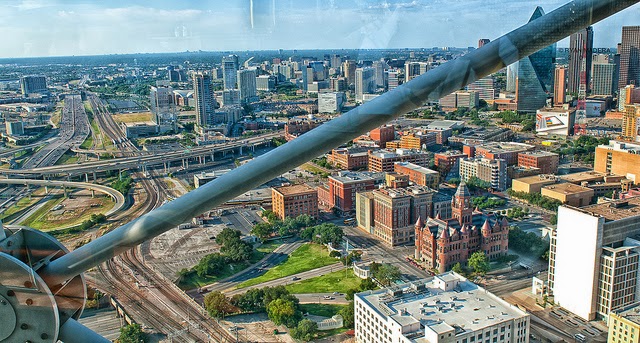 The hotel was just a couple of streets away from where JFK had been assassinated at Dealey Plaza. I made sure to walk over to the Sixth Floor Museum, the site from which Lee Harvey Oswald allegedly fired the deadly shots.

One of the highlights of the trip was dinner at Life in Deep Ellum, a converted warehouse that is now a coffee shop-art gallery-performance space-cultural center. We had exceptionally good barbecue from Pecan Lodge and learned about the experiences of non-profit leaders in Dallas and beyond. At my table, we spoke with David Eisner, CEO of Repair the World, about the potential benefits of mandatory service post high school or college graduation. We also heard from a local restaurateur who started an organization that teaches culinary skills (and all of the skills associated) to young people leaving jail. Some of the participants in that program were serving dinner as part of their hospitality training. We ended the night with a concert put on by Michelle Citrin at the event space. It was a whirlwind trip, but it couldn't have been better!
Posted by Unknown at 1:54 PM